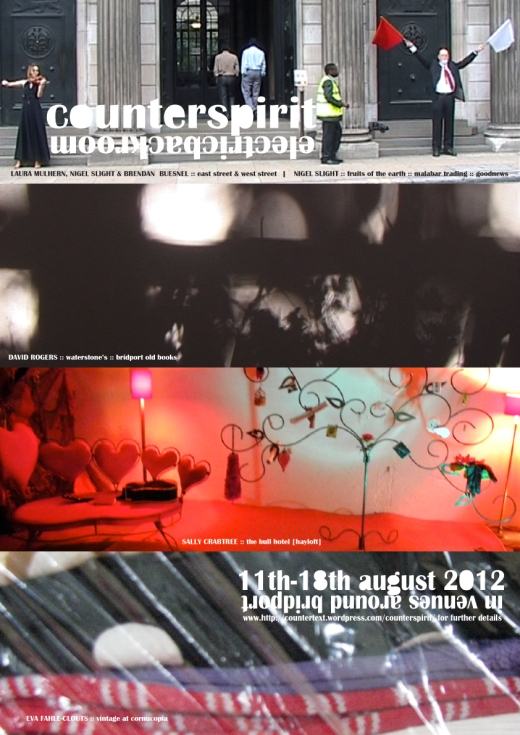 Venue :: Fruits of the Earth.

An Installed venue and subject specific work referencing the tragic and horrific misuse of agricultural chemicals during WWII.

A collaborative street performance based on an interactive work first performed at the bank of England during the summer of 2011.

The work is both a critique of the banking system and a street entertainment. It was successful on both counts and was found both intriguing and thought provoking by members of the public.

An installed venue and subject specific work. A celebration of the art and artifacts of India, Turkey, Vietnam and countries of the Middle and far East. It is also intended as a balance between the predominantly materialistic philosophies of Western societies and the more spiritually oriented of the East.

An installed venue and subject specific work. An ironical and humorous take on the newspaper industry in general and the infantilism of the tabloid press in particular.

‘Shadow Drawing’ video and audio on 2 screens with headphones.

A visual ‘field recording’ of ‘pure’ shadow without any intervention from surface, form or colour and with no digital manipulation other than editing.

An audio soundscape site specific to the bookshop. 28 members of the public reading from a selection of books from the bookshop, edited and layered, to differing lengths, played back in the venue on four independent systems – phased recorded playback.

not functioning as clothes, but lines of colour

clothes re-found in my wardrobe

witnesses of my life

“The chief  aim of poetry is to delight“ as Dryden said and my main aim for counterspirit was to present an installation that would delight and inspire those who engaged with it. I used the idea of my Poetree (pick an object off the tree and listen to the song or poem it inspires) and my edible poetry biscuits (people create their own edible poetry and when they eat it they become a walking poem). My belief is that the general public are very poetic at heart but are often frightened by poetry – or bored stiff by it and I try to show them that quality poetry can be different – it can be deep and meaningful but fun and interesting too. The role of the installation is to ‘break the ice’ – to entice the public in, rather than force poetry upon them. I like the idea of presenting poetry in ways you wouldn’t expect to see it and in places you wouldn’t normally expect to find it – on the street, on a train platform, in a supermarket, on a cake. By taking it out of context, it immediately breaks down the preconceived idea of what poetry should be, people are ‘off guard‘ and open to viewing things differently.

The Bull Hotel was a perfect setting for this – I was able to add to the ambience of the courtyard but not intrude on people’s privacy. The public could engage, if they wished, but were not forced to do so. We had a whole array of participants aged from 3 to 90 year olds who were given the chance to taste poetry/live art, with a difference.

The public are very discerning – if they do not like something they will tell you. This keeps one on one’s toes as an artist and makes it exciting to present work in such a way. It really is a delight if those you have engaged with, really do go away feeling inspired and uplifted. This seemed to happen during counterspirit – poetry didn’t seem boring and the participants day became a little more poetic.